The silt walkers of Namur perpetuate the practice of the Namur stilts jousts.

The jousters are divided in two companies :

Both companies have existed since the 16th century.

Although they continue to symbolically represent their home districts, jousters are now recruited throughout Namur’s area.

Depending on the circumstances, the jousts bring together between 15 and 60 stily walkers. They use jousting stilts, a particular model of stilts that has developed in Namur over the centuries.

During the fight, punctuated by the drums, the jousters try to bring down the opponents of the other company from their stilts using various methods.

The goal of the joust is simply to bring down all the opposing jousters. A stilt walker who has fallen cannot indeed get back on his stilts. Most often, the game ends when one of the two companies occupies the game area alone.

However, it can happen that the stilt walkers offer a “bout-a-tot” (“until the end”). In this case, the remaining jousters from the victorious brigade compete against each other to designate the individual winner. The “bout-a-tot” is offered to honor a distinguished visitor or to thank a particularly warm audience. It is also systematic during the great joust of the golden stilt.

Joust on stilts is a very lively practice which enjoys great affection among the people of Namur.

Mélans (yellow and black) and Avresses (red and white) still compete regularly today. Several jousts are organized during the year in Namur and in the region, mainly during popular festivals.

The most important takes place on the 3rd Sunday of September. On the occasion of the Festival of Wallonia, the great joust of the golden stilt  takes place on Place St Aubain in front of more than 6,000 spectators. At the end of this highlight of Namur folklore, the winner receives the golden stilt and the unofficial title of best stilt jouster of the year.

Since 1937, the stilt jousters have also represented the city and the region on numerous occasions outside of Belgium.

Since 2015, young jousters aged 6 to 11 have been brought together in the “junior team” and are so introduced to jousting on smaller stilts.

Since 2018, female jousters have been trained  in order to organize soon the first female joust in history. 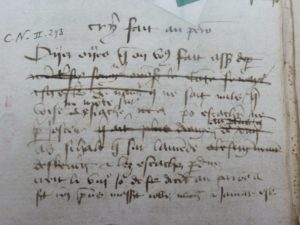 The "cry of the steps" (Cri du Perron) of December 8, 1411 is the first official document attesting the existence of stilt fighting in Namur. The Count of Namur banned the stilt practice for people over 13 years.

Joust for Charles the Fifth

During the enthronement’s ceremonies of Charles V as Count of Namur, the future emperor watches a fight in his honour. He will see one again in 1530.

Joust for Philip II of Spain

Prince Philip, the future King of Spain, attends a stilt jousters’ fight in Namur. He is so satisfied with it that a second fight is offered to him two days later.

Anthology joust for the carnival

The 1669 carnival’s joust is so epic that it inspires the Count Wallef a "Heroic Poem" of more than 30 pages that he is going to publish in 1678.

Joust for the Sun King

After having taken the city and its citadel in 1692, Louis XIV is back in Namur one year later. On this occasion, the citizens of the city offered him a great stilt fight.

Joust given in front of the Tsar Peter the Great 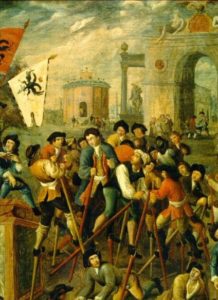 In 1717, Peter the Great, Tsar of all Russias, is visiting Namur. The citizens of the city offers him a stilt fighters’ fight. The sources of that time announce us that the Tsar loved it: « His Majesty expressed so much joy and satisfaction from this fight that the people of his Court insured having never seen him in such a cheerful and satisfied mood for ten years. »

On Thermidor 15 of the year XI, Napoleon is in Namur with his wife Josephine. Two fights are given for them. The Avresses were victorious and received the prize from the First Consul personally.

Disastrous joust for Leopold I, king of the Belgians

In September 1849, the whole royal family is present in Namur to visit a provincial horticultural exhibition. She was welcomed at the Iron Gate by the two Stilt fighters’ teams. Unfortunately many breaks and very long speeches led our Stilt fighters to drink copiously. The fight given at the ’Place Saint-Aubain’ is ridiculed, the Stilt fighters staggering and clinging each other. The scandal is such that the City of Namur will confiscate the stilts one week later. 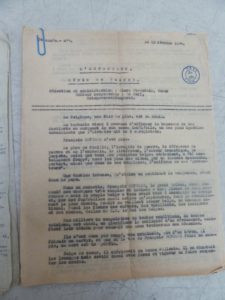 From December 1940 onwards, an underground newspaper is delivered in Namur. It is the work of Victor Vallair and it is proudly wearing a name just like from Namur, "L’échasseur"/ « The Stilt jouster ». 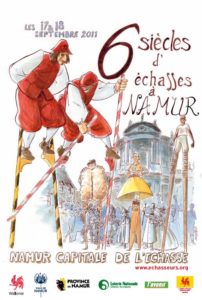 After a year full of festivities, the Stilt jousters celebrate their 600th anniversary by inviting stilt walkers from all over the world (Belgium, France, USA, Malaysia, Togo)

On December 16, 2021, UNESCO inscribed Namur stilt jousting on the representative list of the intangible cultural heritage of humanity.

"ECHASSEUR", THE WORD THAT ONLY EXISTS IN THE REGION OF NAMUR

Stilt jousting is a very old tradition of the city of Namur. Throughout history, the people of Namur have created a specific word for the jouster on stilts.

The term “echasseur” is a regionalism, derived from Walloon, which designates, in Namur and its region, those who joust on stilts. Do not look in a French language dictionary, you will not find it!

This word has existed at least since the 17th century, as this poem attests.